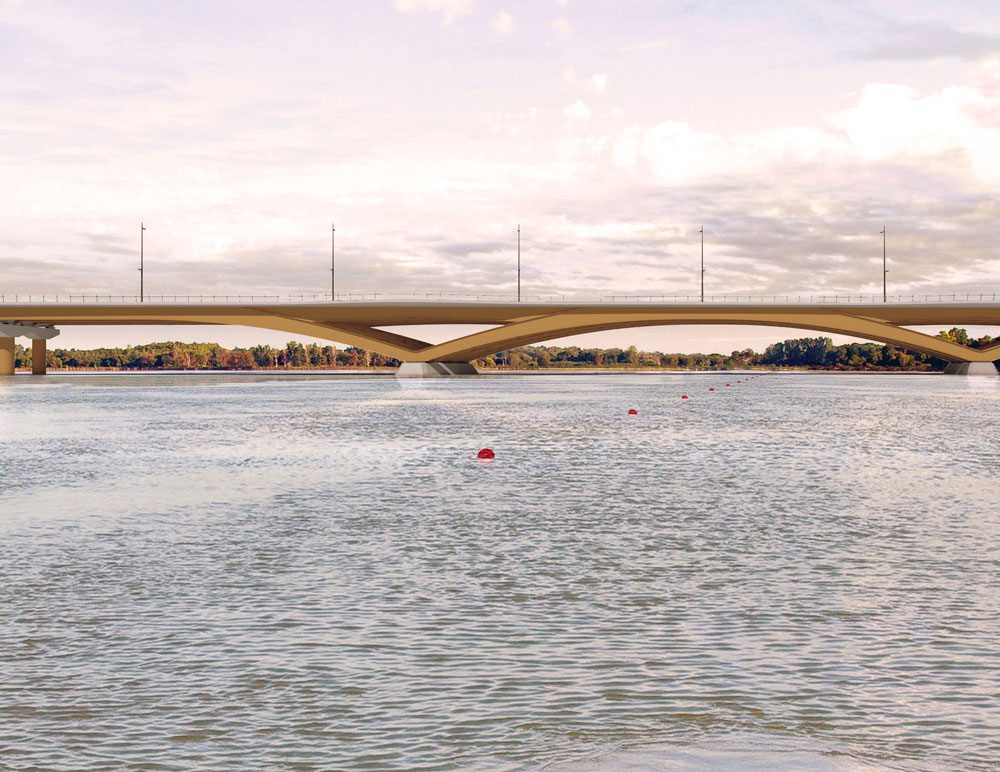 KINGSTON - The lift bridge carrying Highway 2 across the Rideau Canal in the heart of this town is more than 100 years old. For 50 years city officials have worried about the traffic headaches that would result if the old bridge couldn’t get it up anymore. That concern will ease on New Year’s Day when the first vehicle is expected to roll across a new $180 million 3rd Crossing – one of the longest bridges ever built in Ontario.

Because of the width of the river just before it flows into Lake Ontario Mark Van Buren had a problem getting construction underway. How can he get heavy equipment like bulldozers and heavy lift cranes out onto
the river to do their work?

“The river is only 6 or 7 feet deep – too shallow for construction barges,” said Van Buren, Kingston’s deputy commissioner of its Major Projects Office. “So, we decided to build a temporary rock causeway across the river and run the equipment out on that. “When the bridge opens we’ll remove the causeway.” The causeway has a unique lift bridge in it to allow vessels to navigate the Rideau.

Another bridge 2.5 miles further upstream carries Highway 401 across the Cataraqui River and underwent a $27 million renovation between 2017 and 2020 when expanded to six lanes from four. It carries more than 49,000 vehicles each day. Van Buren said drills had to penetrate 50 metres of clay on the river bed to reach
bedrock to support the bridge pillars. Ninety six concrete girders, each 187 feet long and weighing 185,000 pounds, were transported to the construction site on escorted trucks with 50 tires. The girders are manufactured by DeCast in Essa Township near Barrie.

DeCast is owned by the DeGasperis family of TACC Construction. Van Buren said the girders were likely the
heaviest concrete girders moved on an Ontario highway. More than 3,000 tons of steel girders were used to build the highest elevation of the bridge over the Rideau Canal channel. The steel comes from Walters Group in Hamilton.

Walters is also supplying the steel framing for Canada’s tallest building – the 81-storey condominium called The One on the southwest corner of Yonge & Bloor Streets.

Walters also bought a 50 per cent interest in Structure Fusion, a mass timber producer near Quebec City. Walters will supply the mass timber to be used in the construction of a 10-storey mass timber building on the Toronto waterfront for George Brown College. It’ll be the first mass timber high rise in Ontario. Engineer Joseph Strauss designed and built the Strauss trunnion bascule lift bridge on the LaSalle Causeway (Highway 2) in Kingston in 1917. Twenty years later Strauss designed the Golden Gate Bridge in San Francisco.

It scored highest in a public survey from a short list of six Indigenous names. The $180 million bridge is expected to open for traffic on New Year’s Day.

Kiewit Corporation is the general contractor on the bridge which was designed by Hatch & Systra. The project is the first IPD (Integrated Project Delivery) in North America. That’s where the owner, the designer and the contractor are joint participants in the project.

Because Kingston had been debating the prospect of a third crossing for the city for nearly 50 years, it had already sought the approval of other jurisdictions involved with the river, said Van Buren.

Approvals had to be obtained from Parks Canada, the Ontario Ministry of the Environment, Conservation and Parks, Transport Canada and the Department of Fisheries and Oceans.

“As the owner, we bring a considerable amount of project knowledge, background information and established relationships with various regulatory authorities. With the IPD model we’re able to pair these benefits with the knowledge and experience of the designer and constructor,” he said.

The $180 million cost of the bridge was split three ways between — Canada, Ontario and the city.

Read the full Issue See all our Journals